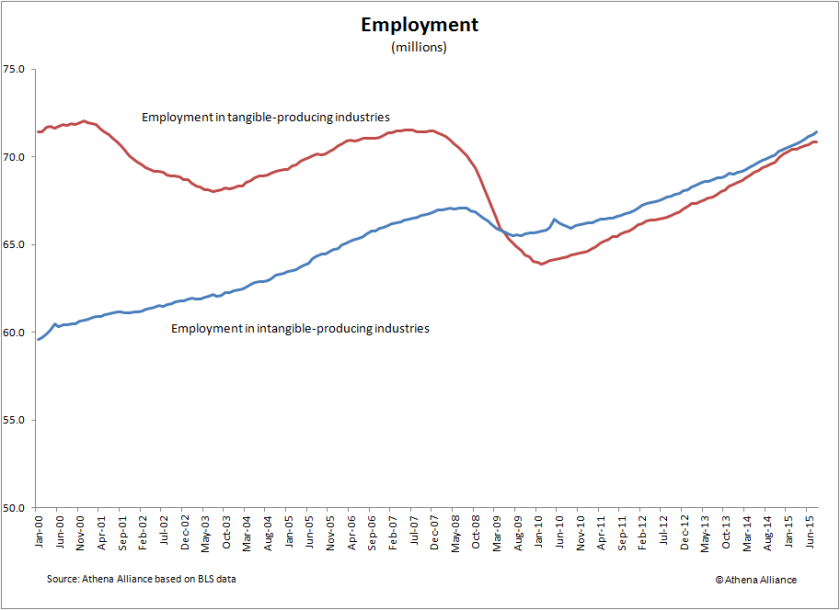 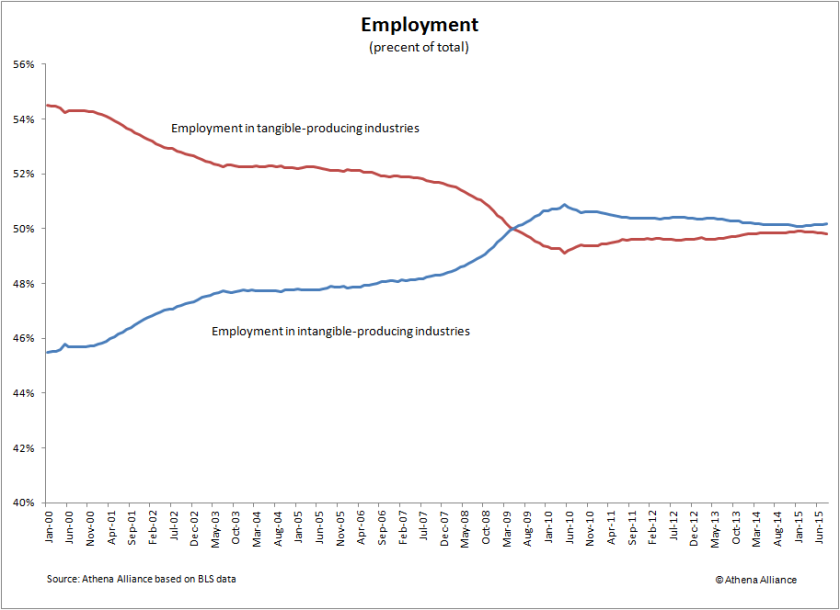 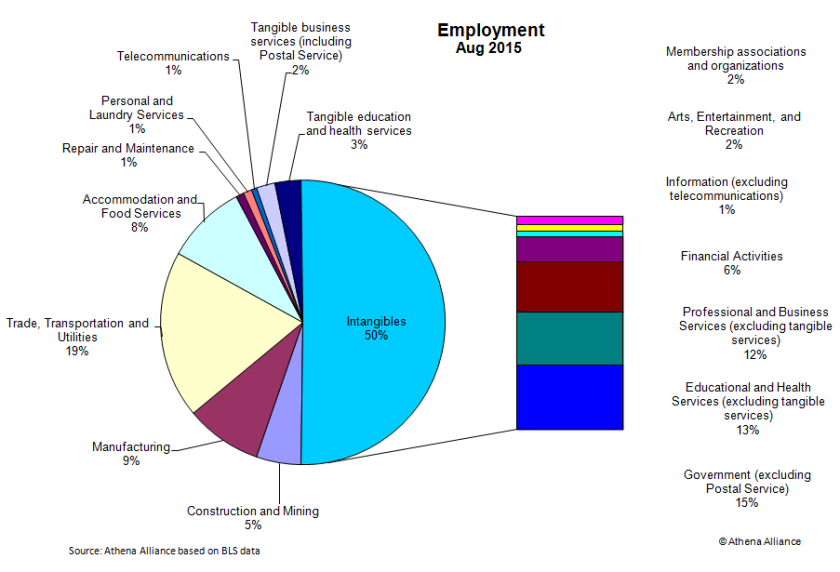 For background on the methodology, see our working paper Employment in tangible-producing and intangible producing
industries.

The U.S. trade deficit declined by $3.3 billion in July, according to data released this morning from BEA. Exports were up by $0.8 billion and imports were down by $2.5 billion. Economists had expected a deficit of $42.4 billion. One worrisome note is that petroleum goods deficit grew for the second month in a row, in contrast to the downward trend for most of this year. The non-petroleum goods deficit improved slightly in July.
Once again exports of pure intangibles continued to grow. While imports rose slightly, the intangibles surplus increased to $15.8 billion in June. The surplus in business services continued to grow. But, once again and continuing a worrisome trend, net revenues from the use of intellectual property dropped. The surpluse in maintenance & repair services was steady and grew in financial services. The deficit in insurance services improved slightly, while the very small surplus in telecommunications services declined. (See detailed charts below.)
Our Advanced Technology deficit dropped from $8.8 billion in June to $7.4 billion in July. The biggest change in the deficit came from a decrease in Information and Communications Technology (ICT) imports, which offset a smaller surplus in aerospace.
Advanced Technology goods also represent trade in intangibles. These goods are competitive because their value is based on knowledge and other intangibles. While not a perfect measure, Advanced Technology goods serve as an approximation of our trade in embedded intangibles. Adding the pure and embedded intangibles shows an overall surplus of $8.4 billion in compared with $8.9 billion in June.

Note: I am now reporting the trade data using the new BEA classifications for services trade, which breaks services into more categories. In the past, the intangible trade data was the sum of Royalties and License Fees and Other Private Services. Under the new classification system, intangibles trade data is the sum of the following items: maintenance and repair services n.i.e. (not included elsewhere); insurance services; financial services; charges for the use of intellectual property n.i.e.; telecommunications, computer, and information services; other business services.

Charges for the use of intellectual property n.i.e. is simply a renaming of Royalties and License Fees. This includes transactions with foreign residents involving intangible assets and proprietary rights, such as the use of patents, techniques, processes, formulas, designs, know-how, trademarks, copyrights, franchises, and manufacturing rights.

For more information on the changes, see the March 2014 Survey of Current Business article, “The Comprehensive Restructuring of the International Economic Accounts: Changes in Definitions, Classifications, and Presentations.”